Begin with praise and honest appreciation

It is always easier to listen to unpleasant things after we have heard some praise of our good points. This is also sometimes refered as the “sandwich rule”. 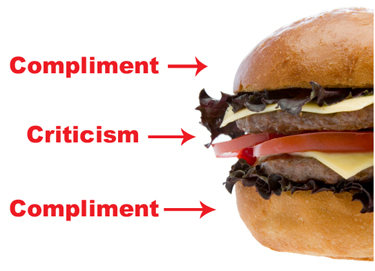 How to Criticize: Call attention to people’s mistakes indirectly

Change the word ‘but’ to ‘and’. For example: a man carefully polished a sermon and showed it to his wife, instead of talking about its many faults, she said she thought it would be a great article for some journal. Be subtle about criticism.

Talk about your own mistakes before criticizing

In order to build rapport with the person you are criticising, start by talking about your own mistakes. You can use phrases like: “When I was your age, I too struggled with…” or “When I was at your level of experience, I too thought that…”.

Gave suggestions, not orders. Let people do things for themselves and make their own mistakes. Asking questions not only makes an order more palatable; it often stimulates the creativity of the persons whom you ask. People are more likely to accept an order if they have had a part in the decision that caused the order to be issued.

Let the other person save face

A few minutes’ thought, a considerate word or two, or a genuine understanding of the other person’s attitude can go a long way to alleviating the sting of criticism. Antoine de Saint-Exupery once said: “I have no right to say or do anything that diminishes a man in his own eyes. What matters is not what I think of him, but what he thinks of himself. Hurting a man in his dignity is a crime.”

Praise every improvement, no matter how slight

Take every chance you’ve got to sincerly praise someone. Everybody likes to be praised, but when praise is specific, it comes across as sincere – not something the other person may be saying just to make one feel good. Nobody wants flattery!

Give the person a fine reputation to live up to

In short, if you want to improve a person in a certain respect, act as though that particular trait were already one of his or her outstanding characteristics. Give them a fine reputation to live up to, and they will make prodigious efforts rather than see you disillusioned.

Make the thing seem easy to do, let the other person know that you have faith in his ability to do it, that he has an undeveloped flair for it – and he will practise until the dawn comes in the window in order to excel.

Make the other person happy about doing what you suggest

When you make your request, put it in a form that will convey to the other person the idea that he personally will benefit. ‘He had a delightful way of putting things; he created the impression that by accepting this great honour I would be doing him a favour.’

« Previous: Win people to your way of thinking (HTWFAIP - Part 3) Next: Using PowerMock + TestNG to mock a static class »